Behind The Scenes - Passing Whispers

The past few months have been so exciting. In December I signed my first book contract with Devine Destinies. 'Passing Whispers' is a paranormal romance depicting the love between the two main characters, Kate and Endel Sorra. When Detective Sorra is killed in a convenience store robbery, the lives of his loved ones are shattered. One year later, his wife Kate is still consumed with bitterness and grief. Deciding to give away all the precious Christmas decorations they have collected over the years, Kate comes across the Snow Globe her husband had given to her the first year they were married. Endel stops her from smashing it against the wall and finds a way to come back to her. Over a two week period, he helps her to discover the truth about his death and other misconceptions that are ruining her life. Although it's breaking his heart, Endel nudges Kate into the loving arms of another man. He knows he can't stay and he wants to make sure Kate will be able to go on with her life without him.

Just a peek... Shhh! I'm not supposed to post these yet! 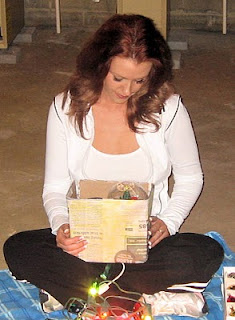 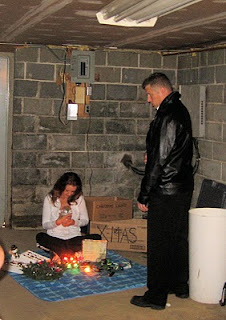 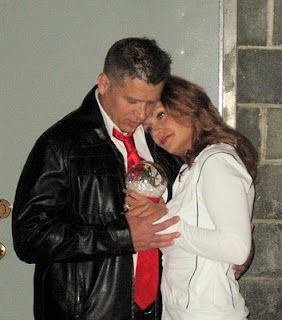 Hi Mom.
I can't believe that this will be my sixth Mother's Day without you. I miss you so much. Life goes on, but it's a lot harder without you here. I miss our talks over coffee. You were always such a good listener. I wish that you were here when I signed my book contract in December. I know that you always had the dream of becoming an author yourself, but it wasn't in the cards for you. You would have been my biggest fan and supporter. Your enthusiasm, determination and faith were contagious. I thank you for that.

I have two new grand-kids, Mom. They are so adorable. I wish they got a chance to meet you. And Brandon is getting so big. He inherited our wild imaginations. All three of my kids turned out so well. You would be proud of them, like I am.

You always had such a way of looking through the darkest of days and seeing the sunshine. I know you're with Daddy, and that's where you wanted to be. I'm happy for you. No matter how long you're gone, I'll never forget how special you both were.

I can't tell you how many times, even now, that I have the urge to pick up the phone and call you. Share a bit of wonderful news, or just cry on your shoulder over something insignificant that will pass.

How I wish I had to make time to run out to the store to buy you a Mother's Day Card. I'd try to find one that told you what a great Mom you were. How much I appreciate everything you ever did for me. That I am still realizing how many sacrifices you made to raise your seven kids. You taught me so much.

I just wanted you to know that, Mom. I love you.

Happy Mother's Day.
Posted by onmiownnow2 at Saturday, May 08, 2010 No comments:

This week is National Nurses' Week. It's a time to celebrate and thank the men and women who care for us and our loved ones during some of the most difficult and joyous times of our lives.

Being an RN myself for many years, and now a Nursing Supervisor, I have been privileged to witness many instances of caring and devotion. I don't think that the general public has any idea what it takes to be a nurse. Please allow me to explain.

School itself, is grueling. Many students must work full time jobs and raise families while trying to complete their education. Once grauduated, they must sit for State Boards and pass before they can work. Everyone has job related stress, but nurses have the fear of losing their hard earned licenses hanging over their heads every minute of the day. Even well meant advice to a neighbor who sought them out, can lead to a lawsuit.

Uncle Charlie can be convicted of a DUI and still have his job, but a nurse cannot. Any felony conviction will result in a nurse losing their license to practice.

Besides caring for her patients with their multitude of diagnoses, medications, treatments, tests, and results, she has to develop a care plan and discharge plan for each one of them. Every detail of her care must be documented. Both her employer and the State scrutinize her notes frequently. Added to her work load is the knowledge that although she is not a physician, she is still responsible for carrying out any and all orders written by the doctor which may be wrong. If any mistakes are made, she will be required to testify in Court, where her care of that patient will be torn apart by the patients' attorneys.

It's normal for every patient to believe that he is his nurses only patient and primary concern. But all of her other patients feel the same way. Today, patients expect and demand a high degree of care. Hospitals require the staff to deliver this care with speed, accuracy... and a smile. They insist that nothing is too much for a patient to ask for.

At the same time, each nurse is expected to keep up with the ever changing technology. She is required to earn a minimum amount of credits each and every year, as well as keep her expensive license current. Every hospital has mandatory classes she must attend annually.

Frequently, I hear patients and their families complain that nurses are "unfeeling". They don't seem to realize that if their nurse allowed themselves to become emotionally attached, they would be unable to deliver the needed care at the moment it was necessary. How could she perform CPR and push life saving medications on the patient in room 108, if she focused on the fact that Mrs. Jones was a retired school teacher, with a devoted husband, three grieving children and 6 grandkids with another on the way? She must distance herself from the patient to a certain extent to be able to do what is necessary. There is a double-standard. Many times the patient requires care that can only be administered by an "uninvolved" person. They would be mortified if a close friend, family member or neighbor had to stick their fingers into their rectums to remove impacted stool. Would you ask your friendly mail carrier to check your episiotomy or administer a suppository to ease your hemorrhoids? No. You want and need someone to do it, who will not make you feel self-conscious. Nurses do things for patients that their own families can't or won't do for them. Nurses are human, too. They are called upon to see and smell things that would cause a normal person to wretch. But they are expected to do it, and act as though nothing is disgusting or out of the ordinary. Many nurses find other ways to show how much they care. They let patients sneak in young children and even pets to visit. They arrange baby showers, birthday and anniversay parties right in the hospital for patients who are too sick to go home. They bring in clothes for those who are in need. Don't be surprised to see a couple of nurses that cared for your mother at her funeral. Nurses do that sort of thing. They stay after their shift is over, off the clock, to sit with a dying patient or his family. One nurse I know, sat at a patients bedside and sang to him because he had no family or friends. She didn't want him to die alone. She sat there holding his hand until he was gone.

Add HIPPA to the stresses of nursing. No matter how distraught your family members are over you, and how much the nurses heart goes out to you, she is NOT allowed to discuss her patients with anyone. It's the law. She can be fined, fired and even have her license revoked for sharing personal information with anyone other than the patient. Yet, the family frequently retaliates to that news with anger and hostility.

Let's look at personal sacrifice. Nurses are required to work weekends and holidays. While most people are at home having a delicious Thanksgiving Dinner with their families, the nurses have left theirs to go to work. It's sad to hear the nurses on the telephone asking their kids if Santa came, how many Easter Eggs they found on the Hunt, or how they liked the fireworks display on the 4th of July. They have to give up so many special times and occasions with their families... because sickness never takes a holiday. They are nurses. Throughout my own kids lives, they thought holidays only came every other year.

No matter what is going on in the life of a nurse, she is expected to leave her problems at the door. She can't take the chance that her worries will interfere with her care. So what if her mother has just been diagnosed with cancer? If her husband may be cheating on her? If her teenagers are out drinking or maybe taking drugs? She has her patients to worry about this shift.

And what does the nurse get for her efforts? Free medical care for herself or her family? No. She pays every bit as much as anyone off the street. Free or reduced prices for prescription medicines? No. A great pension plan so that when she's old enough to retire she can do so without worry? No. Most nurses continue to work until they are in their late seventies. Bear in mind that a career frought with lifting, turning and assiting patients in and out of bed have left her with severe back pain. Not to mention foot pain from endless hours of standing on her feet. Yet, despite the constant pain from years of hard, laborous work, nurses work much longer than the average person. I can't tell you how many nurses I knew who worked until they suffered a stroke or a heart attack. Some while on the job.

Nurses do look out for one another. They donate vacation time to other nurses who need time off but have no time left of their own. They hold fund raisers for those who are suffering financial difficulties. They rally to the side of a fellow employee who has lost a loved one.

I want to take this opportunity to tell every nurse I know, how special she/he is. I want them to know that they have saved lives and helped patients to recover. Their touch will be felt by almost everyone at some point. Thank you, Angels Of Mercy, thank you. I pray that if you ever need it, another nurse will be at your side when you need them.
Posted by onmiownnow2 at Friday, May 07, 2010 No comments: