Anticipation is running high as my new children's book 'The Snow Lord and the Spring Fairy' is almost ready to go to print! With a little luck, it will be released before Christmas. 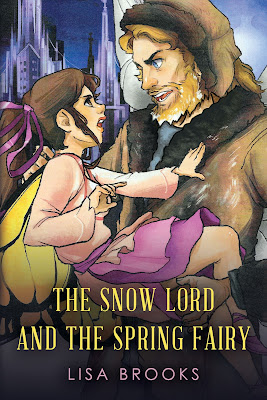 When the Paradise Prince loses his Princess in a tragic accident, he can't bear to live on their beautiful tropical island any longer. Grief stricken, he moves to the most desolate place on earth - the Antarctic. Now known as the Snow Lord, he lives alone in an ice castle with his new and only friend, an albatross named Reilly.
Evolet, the Spring Fairy, is responsible for planting seeds and bulbs all over the world. Although she knows her flowers can't grow in the Antarctic, she can't resist planting just a few crocus bulbs on the very edge of the snow.
Furious at her attempt to bring color to his land, the Snow Lord captures Evolet and locks her in a large dog cage.
Can fairy the Snow Lord to set her free? Can she manage to melt the hearts of these two characters and teach them the meaning of happiness?
Posted by onmiownnow2 at Tuesday, November 01, 2016 No comments: